Whether you are coming from the North or from the South on Hwy 93, it is a good idea to first stop at Alamo and fill up on gas and essential supplies. It's going to be almost 20 miles through desert canyon terrain. Also, beware! Do not disturb various protected species that may be on the canyon roads.

Coming from the South on US Hwy 93

Go to Alamo. Fill up on gas and other supplies.

Coming from the North on US Hwy 93 via Alamo, NV. 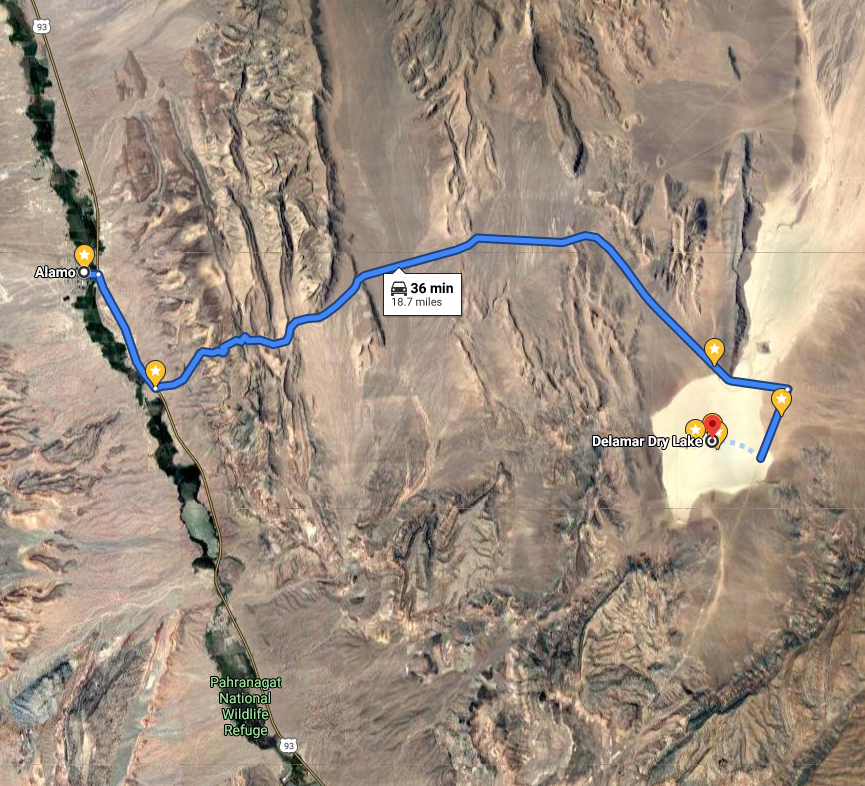 Coming from the North on US Hwy 93 via S. Poline Road

While this route is a shortcut you should make sure you have enough reserve gas. The road is usually well maintained gravel in order to maintain the high tension lines. There are a couple big dips to be cautious of. If this is your first time out it is best to just make Alamo your first stop via Hyw 93. Explore later.


Camping: is Permitted
(no fires on the lakebed.)
(Grills or burn barrels are ok)
Facilities: Provided.

Once a year in May, Tripoli Vegas sponsors a rocket launch at the Delamar Dry Lake bed outside of Alamo, NV. instead of the Jean Dry Lake

The great thing about the Delamar dry lake bed is that it is about an 90 minute drive North of Las Vegas at the speed limit.  If you're like us, and you are tired of the bright lights and big city, camp out on the lake bed to enjoy a spectacular view of the stars at night.

Be aware that this is desert camping and you need to bring in all the items needed to be in the desert like food, water, sunscreen, shade, hats, and chairs, Not to mention your rockets and supplies.

Delamar is less than 50 miles from the famous Area 51.  The story is that the secret aircraft from Area 51 have moved elsewhere.  But if you are real lucky, you might spot a new Stealth or Aurora or something unknown shooting by overhead.

The FAA has approved a launch waiver to 50,000 feet for the Delamar launch.

IF YOU'RE LAUNCHING A BIG ONE CONTACT Gordon McDaniel IN ADVANCE IF POSSIBLE!

In the early 1890s a wealthy Frenchman, Captain Joseph Rafael De La Mar began development of the rich mining camp in the Delamar hills. The town boomed from 1895 into the twentieth century, finally becoming a ghost town at the beginning of World War II, nearly a half century later. Delamar was known to many as the "widowmaker. Several dozen women were widowed by her. Because water was scarce, the rock crusher was run almost dry and that created a fine dust containing sharp shards of silica. The deadly dust was inhaled by the men, causing silicosis and an ultimately death. The dreaded dust also pierced lungs of women, children and animals. Water had to be hauled to all houses except one where it was tapped.  In this house lived the "last rose of Delamar." Agnes Horn, who had been there since childhood. Her husband was one of the young men felled by the dust. She was one of the camp's first settlers and among the last to leave. She was buried in the cemetery, beneath a rose bush that had once bloomed at her window.